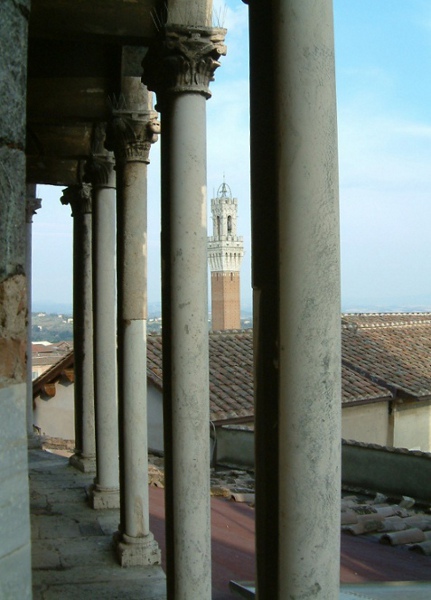 One of the richest cities in Europe for its artistic/cultural heritage, Siena sits on three hills over an Etruscan site. Enlarged in Roman times, Siena became important in the middle ages for its position along the Via Francigena that connected Rome with the north of Europe. Prosperous economically and culturally the city flourished in art and the Sienese School is important in that it paved the way from the Byzantine period to the Renaissance.

The banking system originates here and has one of the first European universities (1241).Walking in the city, or in the surrounding countryside one can still see images frozen in time, and colours (Siena, burnt Siena) that inspired famous painters. Among the most famous Sienese are Duccio di Boninsegna, Jacopo della Quercia, Simone Martini, Ambrogio Lorenzetti, and on a mystical side S. Catherine, S. Bernardino, Pope Pious II, Pious III, and Alexander III.

Siena is the perfect antidote to Florence. Self-contained and still part-rural behind its medieval walls, its great attraction is that it is a completely intact medieval city, a majestic Gothic whole that can be enjoyed without venturing into a single museum.

For more information about Siena visit the following webpage:
www.comune.siena.it

Get Social with US!

Members of the American Glass Guild

Keep me in the loop

Fill out my online form.